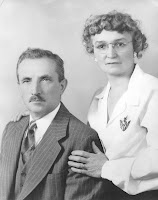 
24. Pietro Fessia -- this is the furthest back ancestor.... unfortunately, his data is in the pile of unsorted research. I think that his wife's maiden name was Ciochetti. I will post more on him when I finish my 2010 GB Olympic task of filing and properly sorting!
Posted by Sue Barry at 9:42 PM 4 comments:

Thanks to Randy and his wonderful blogging prompts, I may actually get my research info published at least in pieces! This is for Surname Saturday! I have lots of surnames, and will try to tackle them in the ahnentafel format so as to have some continuity. [ if you don't know what an ahnentafel is go here:
http://genealogy.about.com/cs/research/p/ahnentafel.htm]

For this first post, I'm going to choose FAIRCHILD, my patrilineal line. Based on my research, and that of many others, we can only trace the line back to JOhn Frederick FAIRCHILD, born 1800 in Athens (or Hudson) NY, although we have been trying to link back to the CT Thomas FAIRCHILD as several lines do.

I have a FAIRCHILD tree at ancestry.com, have listed lineage in the back (unaligned) section of Jean Fairchild Gilmore's books "Early FAIRCHILDS in America and their Descendants" and " More Fairchilds in America".

My lineage back is

2. Robert Edwards FAIRCHILD - my father (1923 Olean, NY- 1990 Phoenix, AZ) m Margaret Therese Fessia
He was a dentist, served in the Navy for 20 years, the army for 1 year out of college, attended University of Ohio and University of Buffalo [now SUNY Buffalo] and took us to live in 7 states and one foreign country! He had a wonderful sense of humor, was a patient and kind man whom I miss very much!

Grandpa was also a dentist [ as were a couple of his non-Fairchild cousins]. He served in the US AEF in France in 1918. He died when I was only five, but I remember him also as kind and funny, so I'm sure that's where Dad got his sense of humor! He was an elder and Deacon in the Presbyterian Church, and had a step mother as his mother died when he was only 2. He and his sister Marion and their cousin Daisy were the " orphans" and were mostly raised by their grandma and aunts. That will be the topic for another whole post in itself!

Fred Fairchild was the entrepreneurial type. He was the owner of a Mercantile and president of the Portville Broom Company. He was the second of five sons, and he eloped with Gertrude to get married. She died in childbirth of their second child, and he later remarried. He was a pillar of the community, serving on the school board, volunteer fire dept., and other positions. He loved to camp and hunt, and pictures of his deer, bear and other hunting kills were shown and passed down in the family. Dad said there was a stuffed bear in the entry to his home, and I never knew if he was kidding or not!

James was one of 11 children. He and 3 of his brothers served in the Union army in the Civil War. He served in company E of the 93rd NY Volunteers. He was wounded at the Battle of the Wilderness, spent time in the hospital, and I imagine walked with a limp, although that's not mentioned any where. He owned and operated a shingle mill in Portville, was co-owner with 2 brothers of a patented washing machine, active in the Presbyterian church, local GAR post, and a man whose "word was as good as his bond" as stated in his obituary. It was his obituary among my grandparents' things that started me on this genealogical journey 35 years ago. I am very proud of him, and named my son James in his honor.

He was a cooper and worked on the Erie and Genessee Canals, hence the various stays in Rochester , Dansville, Belfast. He was orphaned at the age of three, lived with maiden aunts and uncle who mistreated him and he ran away. His mother was supposedly a Backus.


If anyone is descended from any of these persons, or knows of any info on the Fairchild name, or is a Fairchild male willing to take a genealogy DNA test, please contact me at barry.sf(at)gmail.com and let's compare notes on the families involved. I am tired of this brick wall!
Posted by Sue Barry at 7:07 PM No comments: