One of my veteran ancestors- Grandpa Fairchild

Although I haven't blogged in some time, it seemed fitting to post on Veteran's Day. I have done some posts in the past listing my veteran ancestors and the wars they served in, but today I thought I'd do a more in depth biography.  It's too soon to do an adequate biography on my father, and we are in the centennial of WWI, so I decided to profile his father, my Grandpa Fairchild, a veteran of WWI.
He died when I was only 5, and I have limited memories of him, but they are full of the love he showed to us.  The rest I pieced together from what my parents told me, and the photos, documents and letters that have remained in the family ....This will be a LONG post! 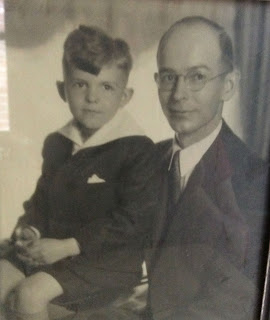 Victor Miller Fairchild was born April 18, 1895 in Portville, Cattaraugus county, New York to Fred W. and Lucy Gertrude Miller Fairchild, Grandpa did not have an easy early life.  His mother died a short 2 years later, after giving birth to his sister Marian. Vic and his sister were raised primarily by his grandmother and aunts, until his father remarried in 1903, when Vic was 8 years old.  He attended school in Portville, graduating from Portville High School , where he played baseball, a sport he avidly followed the rest of his life. I don't know why he decided to become a dentist, but he attended the University of Buffalo, receiving his DDS in June 1917, and his license to practice in October 1917.  He was back home in Portville, NY. 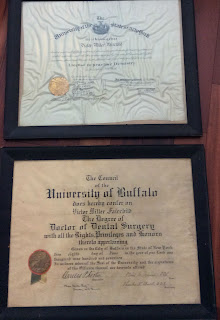 But his life would be changing.    Victor had registered for the draft at the age of 22, while in Buffalo on June 2, 1917, just one week before the date on his degree. He had not claimed exemption from the draft, and the next item I have is from the post card he wrote home from the train on the way to Fort Dix, NJ postmarked Jul 25, 1918. Whether he volunteered or was drafted, I do not know.  I have an entire set of letters and cards he sent home to his parents from that one to the last letter he sent from France in July 1919.   They provide a fascinating look at the day to day life he spent in the army, although not as a true combat soldier. Most are written on paper from the YMCA or Red Cross, and most envelopes and letters have an officer's signature that they have been reviewed....

I have a picture of a tent, marked on the reverse " My first home at Camp Dix. The second night it rained and we didn't have the ditch dug and there was 6" - 8" of water in the tent" 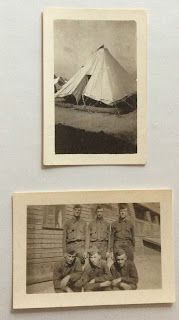 Grandpa is middle back row
He must have been drafted because his first letters describing the life at camp- "drilling, pulling weeds, carrying bales, filling ticks (mattresses or pillows?), digging ditches, working in kitchen, putting up buildings" and also that he might have a chance at filing commissioned officer papers at induction, and complaints about the men in the regular barracks, his address was Company 32, 8th Battalion. Although he failed to become an officer, he changed companies and moved into a separate barracks. He was then in Co E, 348th Infantry. Then he was assigned as a Dental Assistant and would be in the 87th Division  The letters continue with the preparations for going overseas, and he warned that he would not be sending letters of great detail, because he didn't want holes cut in them.  A great example is the letter describing the trip overseas as he wrote it as it occurred, and the version he wrote home after the Armistice was signed   "Dear Father, I certainly had one fine trip across the Ocean and was not seasick".... I'll transcribe those and post as a separate page ... but  from the latter letter, he went over on the Mauritania, the sister to the Lusitania, which had been torpedoed.... the next picture is of the postcard sent home, and the letter of the trip.... the only hole, the actual date in August of the journey (26). 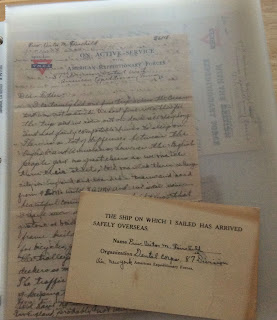 He could only tell them he was in France, but not where, he wished he could speak French, as "it would come in handy" He said he was eating about twice as much as he did at home, and when he got home, he wanted to "live behind the candy counter" at his father's store. He has been on the move in France, and has seen quite a few German prisoners....  In October, the address on the letters becomes Sanitary Detachment 335 Machine Gun Battalion still part of the 87th I think.... and he's able to get a "warm shower bath once a week" He spoke of sending his friend at home a card, but couldn't put his address on it, so asked the parents to give it to the friend...  He sent home a coupon in mid October that would allow his folks to send him a 3 lb Christmas package and his suggested contents for "hard candy like lemon or lime drops, 2 or 3 packages of Sen-Sen,  some gum, a knife to replace his lost one, and whatever they wanted to send in the remaining room".  He describes the locales, astonished that the French wear wooden shoes, and use 2 wheel carts rather than 4, and that it rains a lot....
He writes of the celebration when word came that the Armistice was signed, and the letter carries the name of the town-- Angers, for the very first time.  He then writes a day later that he hopes that it will be the last letter, and that they expect to move and be home before Christmas.
In December, the 335th moves from Angers to St Nazaire, and he's not sure how long they will be there.. He heard of a friend's death (Leon Barber) from his parents... He receives a bunch of his hometown newspapers, and is happy he will have more time to read, but that the medical and dental units may be kept in France longer, as they will process all the soldiers through for examinations and shipping home first.
Around Christmas, he asks if his Dad might cable him some money so that in January when he might get 14 days leave he could go visit Paris and some of the rest of France.... his $8.50 pay wasn't going very far....  By February, he still hadn't gotten leave, because Paris had been closed to soldiers... and due to his moving to Dental Infirmary, Camp 1 in the same place, letters had not been reaching him... In March he writes" Last week I thought sure I would have to go to Russia but they picked two other dental officers to go from here"
Also in March, he is moved to an "Isolation Camp," as he came down with the mumps!  There were many soldiers getting them every day.... he was to be in quarantine for 18 days....
His leave request for London hadn't come through..... ( he's now in Camp # 3)
In May, his leave request for London finally was approved, and he thought that he would try to go throughout England and Scotland as much as he could as well in the time.
Then follow several letters written on Knights of Columbus paper (strange for a Presbyterian!) from Paris, London, and Dublin Ireland,   He's writing that they will go to Belfast, Glascow and Edinburgh. When in Paris the YMCA took them out to Versailles, where the Peace conference was being held, and that he stood by the table upon which the Peace was to be signed.  His next letters from St. Nazaire describe his leave journey, and that they were at the Firth of Forth on Queen Victoria's birthday, and there was a big celebration.  His letters in June describe the dwindling number of soldiers and consolidating of barracks and mess halls, and his desire to get home. The last letter is dated July 6th, and states that they were relieved of duty,  he was packing and had to go get "deloused" whether he wanted or not ... they were to close the port by the 20th and any remaining soldiers would have to go to Brest to go home. He figured he would have about a week before he would get on board a ship,

Following his return, he set up in dental practice in Olean, a larger city next to Portville. At some point, he met Grandma, who was a nurse in a nearby town in Pennsylvania.  They were married at her sister's home in Lock Haven Pennsylvania in June  1921, and Dad, their only child, was born in 1923.   They lived in Olean for the rest of his life. He was an elder in First Presbyterian Church, served on the Select Service Board for WWII.   He was a member of the 8th District Dental Society of New York, the New York State Dental Association, Delta Sigma Delta Fraternity, and the City Club of Olean, and went to many baseball games in Buffalo and New York City, getting a baseball signed by Dizy Dean and his team in the early 1950s.  He died suddenly of a brain hemorrhage (stroke) just 10 days after his 63rd birthday... he was so beloved, that over 500 people (non-relatives) attended and signed the pages of the memorial book at his funeral.

There are many unanswered genealogical questions I have about him. Did he know that when he was in Scotland, it was close to the birthplace of his birth mother's  father and grandfather? Did he know that Dr. Raub, one of the other dentists in town, was a second cousin?  My Dad never answered those, and others either, so I can't fill some familial blanks, but I do know about Grandpa's life during the Great War, due to the letters and postcards, which either his dad or stepmom kept, and then he and Grandma kept also........

Thanks Grandpa, for your service, along with that of Dad, my brother, our Civil War, Revolutionary War, and colonial wars ancestors, for allowing us to live in a great, peaceful and free country!!!!
Happy Veteran's Day everybody!
Posted by Sue Barry at 1:05 PM 1 comment: