Monday Madness ! the tale of Isaiah Burton or Button or???


Well, I have been chasing the Burton lineage since about 1978.... I found my 3x great grandfather Varnum Burton. He was living in Hinsdale, Cattaraugus County, NY where he died in 1902... and in the Historical Gazeteer and Bigraphical Memorial of Cattaraugus County, N. Y. edited by William Adams, pub Syracuse NY 1893, p. 710, it states that he was born in Ulysses NY on July 11, 1808, and that "His father,  Isaiah, a native of Hopkinton , R.I., was a Revolutionary soldier."   It also stated Varnum, his wife, and 3 children had arrived in Hinsdale  Feb. 9, 1841.  So the search for the father and the rest of the family began.  Alfred Burton bought 63.5 acres from the Holland Land company, then sold 11 acres to Sally Luddington.  in 1842. In 1845, Thomas Luddington sells the same 11 acres to Varnum Burton.  Turns out that Alfred and Sally are the siblings to Varnum.

The 1850 US census for Hinsdale shows an 89 year old male, born R.I, living with Alfred and his wife. There is no name, and it is not obvious if the marks on the page are ditto marks to the above name , the child named Horace.   But not to be deterred, I looked for other copies --- Remember the enumerators made more than one copy!!!! There is a county copy of the census still extant on negative microfilm, ( which is why I won't show here) which has name and it could be read as Isaiah or Josiah.....  So far, so good.  On 1855 state census, no old guy still living with any of them, and also Thomas Luddington has died leaving widow with kids... So  he died between 1850 & 1855....

I had luck finding Varnum Burton  ( Farnham on one census!) in Madison County, but no Isaiah.   And I found variations in surname of Barten, Bertin, Burtin.... And in Rhode Island, most of the vital records seemed to be taken from tombstones, so I left the frustrating Burtons alone, revisiting every couple of years, although through Varnum's wife, I was able to trace back to Ides, and found other Revolutionary Patriots, and eventually John Howland , a Mayflower ancestor, so wasn't totally a bust.

I tracked Alfred, who sold his land in Hinsdale and disappeared.  I found they had moved to Lowden, Cedar County Iowa because his second wife had filed a deposition there in support of minor's pension for his son George's widow whose husband had died at Andersonville during the Civil War.   I'm nothing if not thorough in trying to turn over any rock to find this family... did I mention how long I've been looking for them??!

Then this week, I looked again in my Burton notebook, because I'm taking the US Land Records class from the National Institutes of Genealogical Studies, and one of the assignments asks about the first use of deeds..... so I thought I'd try running the Burton names again in Ancestry, etc.... and happened on a guy's tree listing an Isaiah Button / Burton....
hmmmm... so I looked, and he had the kids all listed  Alfred, Varnum and Sally Luddington, along with 2 more I didn't know: Eunice Paine and Clarissa Sanford.... Wow! Varnum named one of his daughters Eunice.   And the tree had attached the Revolutionary war pension of Isaiah Button..... Could hardly contain my excitement!! A pension is a done deal for proving service and a deposition listing all the kids--- Jackpot!!!
Happy dance ---and yet how could I never have tried BUTTON before??? what a rookie mistake!

I immediately contacted the tree owner,  and offered to share all the info I had accumulated on the descendants, and told everybody I might have had  Isaiah finding me just like Geoff  Rasmussen's new book!

I pulled up Fold3.com and looked at the pages of the pension.... sure enough there is a deposition from Cattaraugus, signed by Alfred and Sally stating that their father had died 10 March 1851.... listing the children, but it also said that he had not had a pension, had applied in 1832 but been denied.... hmmm  maybe no happy dance as this is in a pension file. 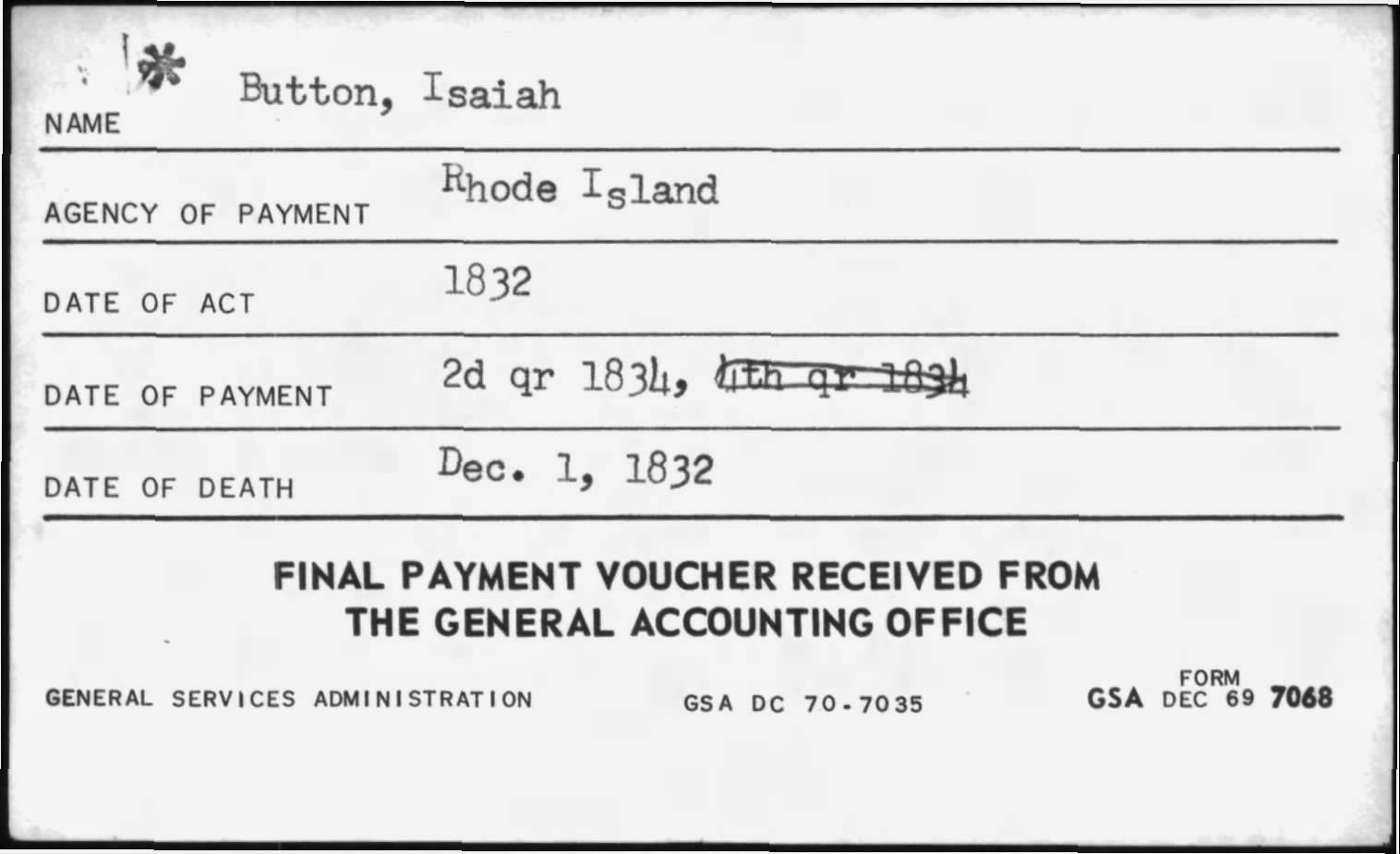 And there is a letter from a Cattaraugus county lawyer, suggesting that if the service the 5 heirs stated was already used, perhaps there were 2 Isaiahs. Added to the fact that the pensioner had stated that he had never left R.I and all the children were born in New York, and my balloon was burst!!! Oh well... but it's not a total loss, as I have a death date for my Isaiah, and the list of the children with the wives' married names,  and a new surname to try.... but why they all changed from Button to Burton???
Oh and now all those trees on ancestry, and the book published in 1970s by Robert Nye that state that Isaiah was born in1732 and died in 1851 that are circulating with WRONG INFO.....  I'm so frustrated and what a maddening family!!!!!
Oh well, tomorrow is another day!