Well, I'm in New York visiting with my cousin Dolores to share the info I found in Raveo, Italy, and she has pictures with no names we are trying to figure out.  I think these are of my Fessia line, specifically of Pietro/Pedro older brother of my grandfather who went to Chile instead of coming to America with the rest of the family.....
So I'm going to post them here, let the relatives in Chile know of this post, and hope that they can identify the people in the photos ( use left to right or by rows)....  Then I'll get back to the Italian research posts, I promise!!!! 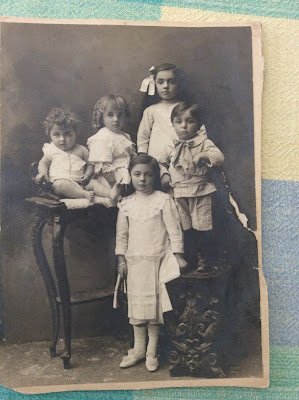 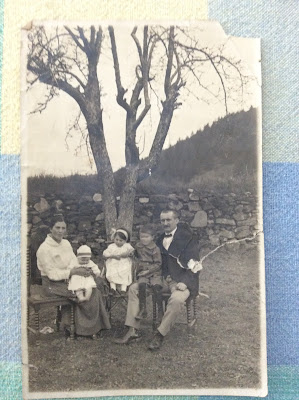 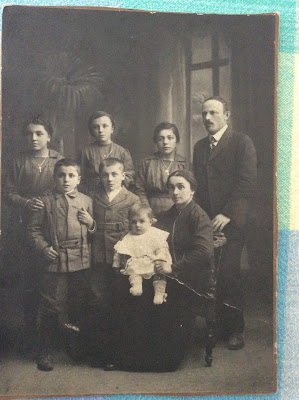 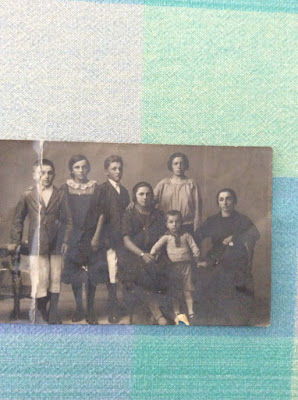 And we think this one may be of Giovanni Battista / John, the youngest brother of Augosto and Pietro who lived in Utica  ????? 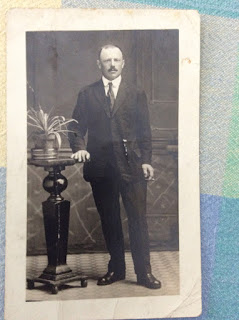 Matrilineal Monday My Italian journey part 3 -- the Raveo story including the surnames, and research lessons I learned.

Well this portion takes place after the Fessia journey in Gaglianico (part 2), but it has a lot of new information, and I want to get it all down on paper before I forget!!! So part 2 will be out of order.

I thought I knew a lot about Italian research, from the classes at National Institute of Genealogical Studies, researching the microfilms at Salt Lake, transcribing and translating documents, and reading all the books on Italian research I could find!     But there is always something new to learn.

My grandmother  Maria Jacomina Teresa Antoinetta Antonipieri emigrated from the Friuli region of Italy with her first husband Angelo Felice  in 1911.   I thought she was born in Enemonzo, and her parents moved there from Raveo, a smaller town about 5 km away. So I started in Raveo.  A cousin(?),  and now dear friend, Danilo Antonipieri,  whom I had found on Facebook, [love social media for finding relatives!] had picked me up in Tolmezzo where I was staying, and then drove me to Raveo..... 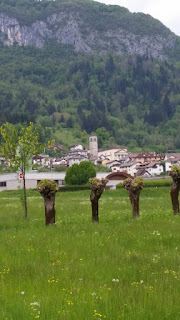 The town is small. maybe 300 people now, and is set in the beautiful Carnia valley, very close to the Austrian border.....

I had hired (through Ancestry.com --progenealogists.com) an Italian genealogist, Gabriele Musumeci, to set up appointments with the local parish keeper of the records, and to be there to translate since although I read Italian fairly well, I don't speak it well.... and he was worth his weight in gold!  (Although even he had to ask questions because they tend to sometimes use words in Friulani, a separate language, which sorta sounds like Italian, Slavic and German mixed....)

It was a beautiful day, and Signore Bonanni met us at the parish office.  When we asked to look at records of Antonipieri.... he pulled out a beautiful book separate from the church records, which when opened, contained pages of hand-drawn family trees!   Neither Gabriele or I had ever seen such a wonder, and I was so excited I could barely keep from happy dancing trough the room!  The book was prepared by the priest about 1900 for all the families in the town. He also raised funds in 1894 to rebuild the church, and a plaque is located on the church. 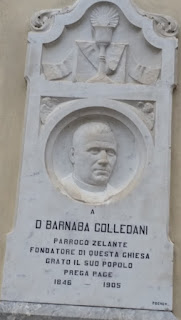 If there is sainthood granted for genealogists, I nominate Father Barnaba Colledani!!!   The book didn't contain all dates for everyone, but made it easy to prepare a bare bones pedigree to start looking for data.....    My thoughts were that we sure did need to get a LDS camera crew here to digitize the book and the church records before another earthquake  (there was a bad one here in 1979) destroys the records!

Here is a sample of the trees, this one for the Noselli  family [tree #71, page 65] which is one of mine.  I took pictures of whole pages with my iPad, and then zoomed portions, as there was, alas, no copy machine!!!  I wanted to be able to read every thing... but we only had about a half day to look at the records.  Signore Bonanni allowed us to use all the  church record books  which went back to about 1862, although the majority of records started about 1700,  unlike the priest at Gaglianico..... 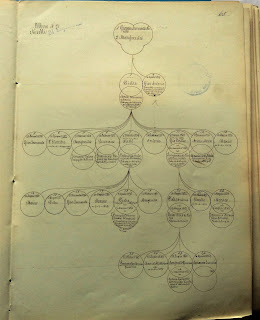 and of course Antonipieri "Chiandat"  was the first tree in the book, followed by  the next page Antonipieri "Bonella" and the a third page Antonipieri .... which led to the first new lesson in Italian genealogy....... Some towns use the old Roman system of a first name, a surname, and a name to denote the branch of the surname family which was called cognome then (or vulgo in the Latin Raveo church records) , which now in Italian means surname!  In Roman times, the surname was nomen, with a praenomen (first name), and then a cognome, which could be a branch or nickname.... found this on Wikipedia which I love!
so New Lesson #1 ...  named family branches!!
Now how to enter into Rootsmagic.... guess I'll use Nickname slot as it puts " " around it....

We found my great grandfather Daniele Anonipieri at the bottom of the  Antonipieri "Bonella" tree [#2, page 4].  the top of that tree  (also a Daniele) was in the first row of children of the previous Antonipieri "Chiandat" tree.  We asked Signore Bonanni if he knew why the split, and he said that Daniele had gone "on coook" [ not sure of spelling, that's just what it sounded like...]  When we asked  what that meant, he explained was like the Cuckoo bird. who moves into another bird's nest... instead of the wife ( Maria Ariis called Bonella) coming to live with his family, he went to hers, hence the new branch of the tree Antonipieri "Bonella"!  Even though both households were in Raveo!

We spent the afternoon at the parish archive in Enemonzo, returned to Raveo the next day for a half day to finish looking for records.... In the two days, we managed to take pictures and locate records  giving names back to before 1700, about 7 generations!!!!!! Have never managed that in US records in all my 40 years of genealogy. Of course it helped that they remained in the same town for 200 years!   The surnames in my tree include several Bonannis from different branches, Ariis ( diff branches) , Vriz/Vritz, Noselli, Iaconissi, Valino, Buttini, Pascoli, Piazza. I suspect that the reason the priest created the trees was to make sure the people weren't too closely related.... although we found one marriage in the family which had a papal dispensation for the marriage.  Here's my grandmother's parents' marriage entry (second one). 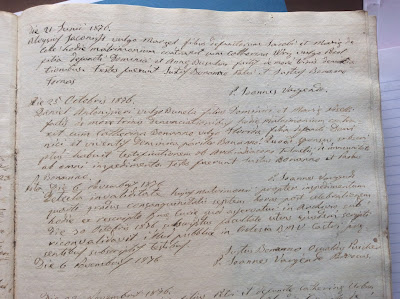 It turns out that they were related also, about 4th cousins.....   I'll add more info in part 4 about both Enemonzo and Raveo research, as this is getting too long!   And I'll update my ahnentafel page with the new generations. But I'll close with a picture of Signore Bonanni (l), Danilo Antonipieri (r) & me(c) in front of the old Bell tower.   Ciao!!!  Arrivederci! 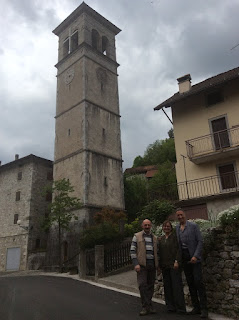 My Italian Journey- the beginning background

This is a start to a set of blogs about the search for my Italian roots, half of my heritage. I have spent most of my 40 years in genealogy researching my father's side of the family.  I have done a couple of "Surname Saturday" posts to at least publish my mother's parents' surnames so that I might connect with relatives around the world, because that's where the Italians have gone--- everywhere!

I was able to do a little more on my Fessia line than the Antonipieri  line  (see posts of January 30, 2010 and  August 17, 2009) [OMG was it that long ago?!].
I found Fessia cousins in Chile through Facebook, and also some Antonipieri  cousins. It helps to have "rare" Italian surnames!

The only documents I had were my grandparents' death certificates (with parents listed as unknown--- really?!) and the names of their parents as remembered by my mother, who only knew one  grandparent who came to America.  It helped when the LDS church microfilmed the province records in the Piemonte region of Italy.  On my trips to Salt Lake, I had to request them from the vault, 4 at a time,twice a day, as instead of filming all one town across the years, each film (or 2) covered one year across many towns..... There are decennial indices, however, they are from the start of the Italian country, so 1876, 1886, etc.... rather than 1870, 1880 etc like I went looking for originally.... but those records only go back to 1866 and a couple of 1840s baptisms attached to later marriages.... and they haven't microfilmed those earlier church records yet, at least not in the areas of Italy I need..... and they hadn't filmed anything in the Friuli province of Italy where grandmother was from...
And of course over the years I had sent letters in Italian with International Reply Coupons, and International money orders for donations/costs--- which disappeared into a black hole somewhere, as I never heard any reply!!!

So although I've been using the records from FHL, I decided to see what else I could learn, and started to plan my "bucket list" trip to Italy,since I'm retired now.  I'm pursuing an American professional certificate [40 courses, like a degree!] at National Institute for Genealogical Studies [www.genealogicalstudies.com], and the electives are allowed from any of the country certificate courses. I took  the course on Italian Civil Records:Part I, Although I was very good at translating and transcribing the records already, I learn something new from every course. I I found out about a private Facebook group  for Northern Italian research, and of a website for the Italian Archives!!!!   And wonder of wonders, the Italian Udine province archive main page had a choice of English!!! They have a project to list something for everyone born between 1850 and 1900.
you can search on surname , or surname and first name.... I found a listing the marriage of my great grandparents,with just the year 1878, but the birthplace of Raveo, and the names of their parents!!!! For the first time in 40 years, I filled in the 4 names in that generation!!  And really started making  trip and plane reservations.

I went back to Salt Lake with Leland Meitzler's  Christmas Tour, and made arrangement through Progenealogists (now owned by ancestry,com)to hire a genealogist to make appointments at the parishes in Gaglianico (BI) Piemonte,and Raveo and Enemonzo (UD) Friuli, and perhaps to even have the genealogist to meet me at the locations.....  A real necessity because although I can translate genealogical documents, and understand about half of the conversations, I don't speak the language well at all!
The trip itinerary changed from mostly genealogy, to a tour of Italy,since my husband and daughter were also going, but I had carved out at least 2 days in each area for my research....

Then I talked to my 2nd cousin Dolores Tafuri, who has the pictures postcards and even my Grandmother's Italian passport!!!!  She made copies  of everything,  and I was astonished at what was there.... so I had lots to take with me.....   and the next posts will be about the trip, the genealogical lessons and the data ..... I'm still on cloud 9 and I've been home a month!!!
Ciao til next blog
Posted by Sue Barry at 6:39 PM No comments: