Well, this post is a tossup for Surname Saturday or Madness Monday, because trying to find data on my farthest back Burton has driven me mad for years.....


my lineage to this line is

1. me
2. Dad
4. Victor Miller Fairchild
9. Lucy Gertrude Miller
19. Mary Elizabeth Burton [Mother of Lucy Gertrude Miller] was born in Hinsdale on 20 May 1845. She was the fifth child of seven.(?). She married John Miller(1847/9--1934) (see previous post) sometime before the birth of her daughter Etta in Jun 1868.  There is the distinct possibility that she is the mother of Orris Burton, born in 1865. He was raised by her parents. I will save his tale for another day.....  Mary Elizabeth Burton and her husband John were the parents of seven children: Etta[ married James Kendall], Angela [married Dana Carmer], Fred [married Bess Shannon], Lucy Gertrude [married Fred Fairchild], Alva [married Cora Foote], Elmer who died at age 10 in 1890],  and Laura [ married James Randall].There are very few records existing for Mary Elizabeth except censuses.  She died 19 Sep 1932 in Hinsdale, and is buried in Maplehurst Cemetery there.  This is the only picture I have seen of her [ with her husband John]. 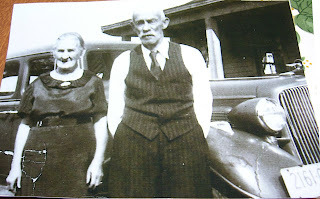 38. Varnum Burton  [her father] is the start of the maddening tale. He was born 11 July 1808. The place according to NY state censuses is Madison County, but Tompkins County according to the biography below. He first appears in Tioga County as Farnham Burton in the 1830 census. His story is told in the Biographical sketches from: "HISTORICAL GAZETTEER AND BIOGRAPHICAL MEMORIAL of CATTARAUGUS COUNTY, NY, ed by WILLIAM ADAMS, Published 1893 (p710):

When he arrived in Cattaraugus county, he was living on part of a 67 acre lot owned by Alfred Burton, and next door to the Luddington family. Thomas Luddington's wife Sarah 's death certificate lists name as Sarah Burton Luddington.  So I think that the three were siblings. Alfred ends up in Iowa, but the rest stayed in Hinsdale. I suspect that there was another sibling  Acus who remained in Tompkins County, but have not proved... Varnum  died in Hinsdale on 8 Feb 1902. He is buried in Maplehurst Cemetery but there is no tombstone.

76. Isaiah Burton   [the father of Varnum] is the brick wall.  He is not listed as the head of household on any census. He does appear in the 1850 census as an 89 year old man born in RI living with Varnum. In the federal copy, the name is missing, and looks like hash marks under the name of Horace (Orris). On the county copy of the census [  Yes, some of those still exist and shpould be looked at!!!!] the name could be read as Isaiah or Josiah.....  The name of Varnum, given to his son is the last name of the General  Joh Varnum, who led troops in New England in the Revolutionary War... but I have not yet found Isaiah's name on any pension or other records..... and no mention of wife or deeds in Madison, Tompkins or Tioga County, and no tombstone to be found.   If he really was a Revolutionary War patriot, his story is lost, which is a real shame....  The family of Acus Burton of Dryden, Tompkins County [place Varnum came from] whose birth would make him Varnum's older brother by a year or two, has a son also named Varnum. It is possible he was named for my Varnum, who would have been his uncle....

So if anybody has any loose end to a Burton family in Tompkins, Tioga or Madison County,  I'd love to hear from you. I have notebooks full of data, but maybe you have the magic piece of missing data......
Posted by Sue Barry at 1:50 AM 1 comment:

I have created a new page in this blog to post the set of letters written mostly in the 1890s between the Rhodes  cousins in England, and the Rhodes/Sparks  cousin in the US in Michigan.  I have only transcribed the first two, so there are more to come.   If you are a Rhodes or Sparks cousin in England or the US who recognizes the names as in your tree also, please contact me!!!
Posted by Sue Barry at 12:42 AM No comments:

52 Weeks To Better Genealogy by Amy Coffin(http://wetree.blogspot.com/2010/01/52-weeks-to-better-genealogy.html) is a series of weekly blogging prompts that are a bit more challenging and are geared towards those new to the field of genealogy and family history as well as those who want to brush up on some skills which might be a bit rusty.

I usually use Google or Yahoo, so I thought I would try a few different engines.  I tried Bing, with the name Antonipieri, a rare Italian surname of mine ( see earlier post for the map of surname in Italy).  Bing did not bring up my blog posts in the top 10 as Google had.  So I next tried dogpile.com  It had my blog posts about midway on the list.... but it had an intriguing way of locating them through a site called www.bloglines.com.

I had never heard of that site, so I investigated it.  You can search for anything in posts anywhere in blogs!  You can also register for free, and list your blogs, blogs you follow, etc. and narrow searches to those if you wish.  At that point, I quit with the original challenge of the "major" search engine, and spent time investigating this specialized search engine. Although it won't bring up the rootsweb and ancestry hits as Google or Yahoo, it works wonders with blogs, and often that's where the best info and tips can be found!

I had fun playing with this, as now I can search for a blog post by one of my fellow genies without having to remember who wrote it, and which blog I saw it in.   So while I started out looking to see the differences in search engines as not that great a challenge, I wound up finding a new research tool.   Cool!
Thanks, Amy for the challenges, and Thomas for bringing them to my attention! [and Randy, I can't make these as pretty as your posts.... yet!]

Now I can work on Faithful Friday and Surname Saturday posts!
Posted by Sue Barry at 12:04 AM 1 comment: