OK... After months of no posts, [life has been incredibly busy and not conducive to genealogy... I thought I'd get back into the grove] ....  and this one is really long, and really maddening over the years!!!  So may take more than one post!
I'm not sure how to begin on this post... there are are so many brick walls in this line...... My great grandmother was Luella Hoffman. Or sometimes I saw Hoffman.... Anyway, She was born in Canada 1870-71, married Lemuel Edwards and they moved to Pennsylvania. She took up painting after her children were grown, and I have a couple watercolor and oils in my home.  She died in 1953 in Lock Haven, PA. Her newspaper obituary gives her parent's names as John Huffman and Nancy Toll.
[I'd put the obit in, but unlike cousin Leah [see Random Notes blog http://leah333.blogspot.com/2011/01/organizing-electronic-genealogical.html], my electronic filing system isn't as great, and I can't find it just now!!!!  Guess I'll learn from you , Leah!]
I spent a lot of time (years!) looking for that marriage. Couldn't find one.   Then Canada published the Ontario birth records. And I found her birth record  It has her name as Lually and her mother's name as Nancy Huffman ... with Illegitimate  written for father's name.  With Mrs. Martha Huffman as the midwife/informant. Grandma?, widowed aunt?   And won't the great aunts be upset at this... No wonder the falsehood!!! 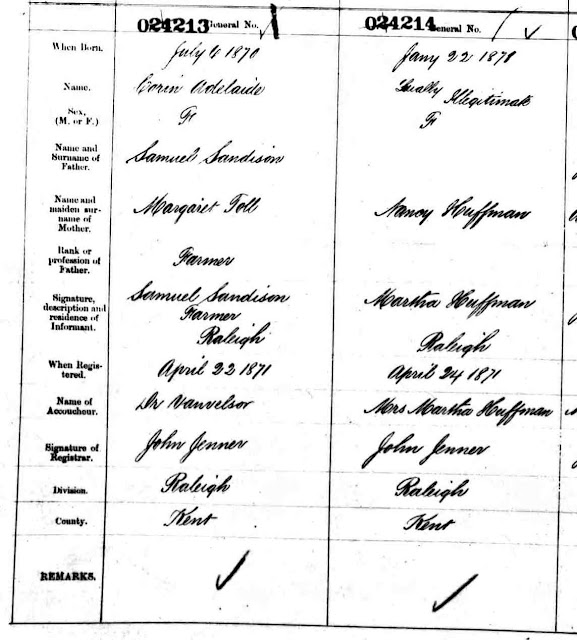 Then I looked in the Canadian census for 1871 and found the following  (hey a baby born in Jan that year should appear!)

Now the age of Martha and Rudolph could be in 60s or 40s , the numbers are not real distinct.  And there are Toll families in front and behind the Huffmans.  Also Luella is now Emela. but with proper month of birth. are Burwell, Jemima , etc siblings, or aunts and uncles?

The 1881 census image at ancestry is too faint to read. The transcription has the family living with a William Neuweck, lists Luella as Tuellon , has no Martha, lists Rudipt as 52, so He is obviously 42 in 1871, but was Martha then his wife, or mother, or sister-in-law?  I have found a death for a midwife Martha Huffman in 1879  aged 72 years, but gives no marital status or other clue. but this would seem by age to make her 64 in 1871, so more likely Rudolf and the others mother rather than his wife or sister-in-law.

Then in the 1861 census, I found a David Huffman, Martha Huffman, with children Richard, Jerimiah ( Jemimah) Nancy & William ... It seems to be the same family, but then is Richard RIchard Rudolf? and is Jerimiah Jemimah/Jamma ??? they have a laborer John Newrick  !!! so seems to be the same group.... and DAvid and wife Martha are born in the US!!!! 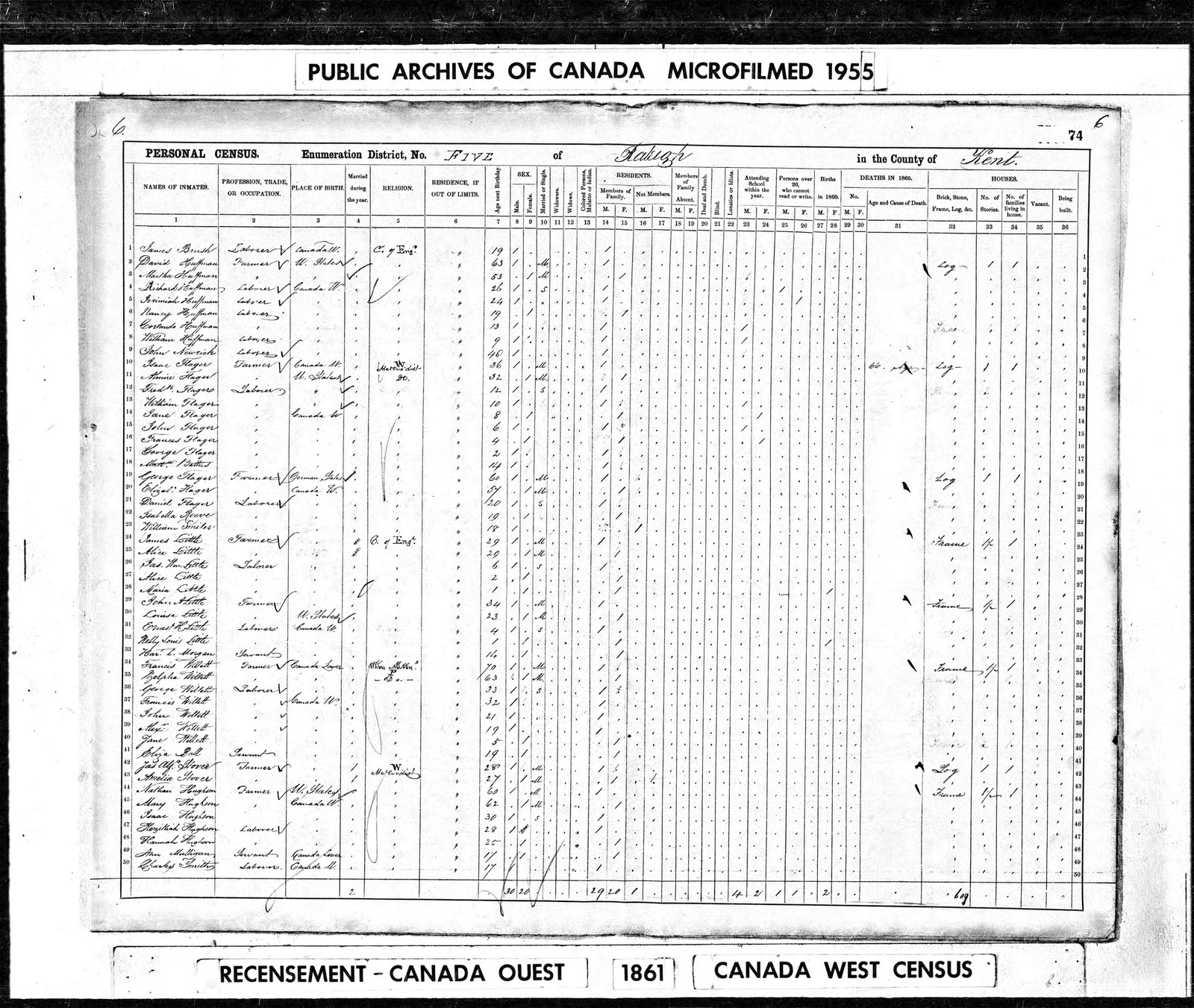 There is no marriage record that I have found in Ontario for the wedding of Lemuel Edwards to anyone. But Lemuel & Luella (Lula)  show up in the 1891 census with three children, one of whom is my grandmother. She married at fifteen or sixteen, and had at least 3 children by the age of 20!
R Huffman ( Rudolf/Richard?) appears in the 1891 census (with relationships, Yeah!)  Jemima, Maggie, and William listed as siblings, and John Nuwick listed as lodger. No Martha (deceased) or Burwell, but I found a B. Huffman (Burwell?) on the previous page listed as seaman, lodging with another seaman and the ship's captain....  And no Nancy..had she died? or married  as was 30s in 1871?

Then found a marriage for a Nancy Huffman (spinster)  and a John Watkins  (Widower) Dec 20 1882. Married by a minister named John Cairns, with witness Jane Cairns. Lists her parents as David and Martha Huffman!!!! Yeah! Maybe?!

I then decided to follow the other siblings forward, to see if anybody has a clue... (remember that siblings are as important as your own ancestor!).
But I'll leave that for part II next Monday... this family is definitely worth 2 Monday Madness columns!
Posted by Sue Barry at 4:27 PM

You're off to a good start on your hunt. I found several spelling and name variation researching using the census records. Don't let them throw you off. Sex, approx age, and family dynamics/trends should help keep you focused. Good luck!
Regards,
Theresa
(Tangled Trees)