Well, Edwards is the third surname for my Surname Saturday posts. It occurs to me that it will be awhile until I get to some of the names I have traced way back. The first few are mainly my "brick wall"  types for one reason or another, and this one is no different!
My Edwards connections from my ahnentafel are :

5.  Jennie Gertrude 'Jane' Edwards
Grandma was married to Victor Miller Fairchild ( see previous post on that surname).
She was born 13 March 1891 in Merlin, Kent county, Ontario Canada. She had 6 toes on her left foot according to her birth certificate, a fact I never knew, as visits to relatives were few and far between in my US Navy traveling family. 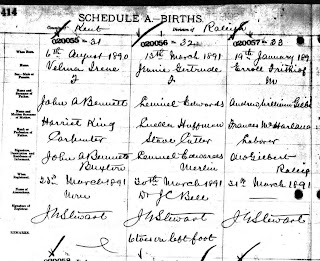 The family arrived in the US by 1900 when they appear in the census in Leady township, Clinton County, PA. She was the youngest child, with an older brother Harry Lemuel born 1890 and an older sister Grace Elizabeth born in 1888.  She always went by Jane, lied about her age, gave her birth year as 1895, because she didn't want people to know that she was older than Vic. My father even acquiesced, and placed 1895 on her tombstone!!! She trained as a nurse, and she was married  in Lock Haven PA on 15 June 1921.  When she died on 18 Apr 1974 in Olean, NY, I was a senior in college. As dad was an only child, her house was sold and all the belongings were brought to our home.  It was in an old suitcase that I found the obituary of James H. Fairchild, a veteran of the Civil War , which sparked my over 35 year obsession with genealogy.


10. Lemuel Edwards ---my great-grandfather, was the oldest (really second, but the first died at one day old) of nine children. He was born in Essex county, Ontario, Canada on 13 July 1864. By 1870 the family was in Warren, Macomb county, MI, and in 1880 and beyond, in Flat Rock, Wayne county, MI which is part of the greater Detroit area. He worked as a logger, or stave cutter, although he rose to be a mill superintendent in later life. He returned to Canada, as he married his wife Luella Huffman there sometime around 1886 -87 (although I have not yet located a marriage certificate).  His three children were all born in Canada. According to the 1910 census they returned to the US in 1898 or 1900, by 1910 were in Norwich, McKean co, PA.  He was listed as Alien in 1910, but in the 1920 census says naturalized in 1901. Haven't yet found the papers, so am not sure if he [or his wife or my grandmother ] was ever a US citizen. He died in Columbia, Richland, SC on 26 October 1923 of pneumonia, where he was superintendent of a stave mill. 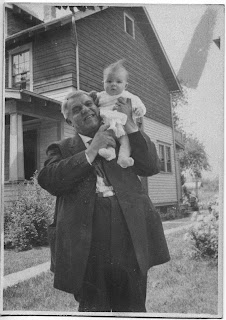 This picture was taken of him holding his grandson, my father between Dad's birth in March of 1923, and Lemuel's death in October of that year.The house in the background is not my father's home in Olean NY, so where the picture was taken is unknown.
Lemuel's death certificate sent me on a wild goose chase looking for a marriage between a John Edwards (father)and Sarah Rhodes (mother) .... turns out his mother was Elizabeth Sparks.... it was his  mother's mother that was Sarah Rhodes...


Lemuel's brother Arthur William Edwards was the mayor of Wyandotte, MI when he died in 1932. He and his son ran the American Toy co. [or American Metal co?] . my brother Charles Lee was named after the son.

20. John Edwards [Jr.]  It is with this generation and the next that the mysteries and brick walls start.  He was born about 1835 in Canada East [Quebec] according to information on his marriage certificate. His father's name was listed as John, and his mother's name as Emily.  He married Elizabeth Sparks on 1 November 1862 in Kingsville/Gosfield, Essex, Ontario, Canada. The family arrived in Michigan sometime between the birth of Naomi in Canada in 1868, and the 1870 census.  He was a carriage or wagon maker by trade. In the 1880 census, he gives his father's birthplace as  Canada and his mother's birthplace as Portugal.  He named one of the daughters Naomi Alzora Permelia, so perhaps that is true... The stories in the family have him as orphaned, or  his father being French and the name should be Jean Edouard with the surname dropped because he had to leave France because of a duel..... The records are sparse, and there are many Edwards or Edouards in Quebec, so we may never know....  He died the 25 Feb in either 1897 or 1898.

40. John Edwards  .... married to Emily... was he French, or French-Canadian? Was he a seaman, or did he fight a duel? was Emily really from Portugal? None of his descendants (and there are a lot of descendants! ) seem to be able to get past this portion of our history due to the dearth of records and research. Another brick wall to climb!
Posted by Sue Barry at 1:27 AM