Faithful Friday , profiles of my family

This post is a little different from my usual surname, or individual story posts. I have recently gone onto session again as an Elder in the Presbyterian church in La Canada, CA. For those of you who do not know, Elders in the Presbyterian church are ordained, answering the same questions of the Book of Order as Ministers, and are responsible for representing the congregation and are the government of the church at the local level, setting policies, serving on committees including membership to financial and personnel to buildings & grounds.  It is not an easy position, and is at least for me, a big step, and is awakening a new spiritual growth time on my faith journey. I decided to look across my extended family genealogy and write about some of the other ancestors and relatives who have been faithful servants of God.  There are many more than I had expected, so this will become a series of posts! We have been involved with the Presbyterian, Methodist, Catholic, Baptist, and Congregational churches, and even the Puritan and pilgrim churches throughout the centuries.....

The first two will be my Dad and grandpa (as I will always try to write about my Dad!):

My dad, Robert Edwards FAIRCHILD was a dentist in the Navy by vocation, and although never served as official in any church that I find documented, was heavily involved in every church we attended when he was not at sea. He and my Mom were always leading the high school youth groups, and I remember many pot-lucks and bowling alleys and trips to beaches and lakes with the groups growing up.  He even remarked to me once before his death when I was first asked, elected and ordained as elder, that that was one thing his father and daughter had become that he had not, and regretted. He was a very Christian man, with a great heart and great faith, who always had a great sense of humor, made people laugh, provided lots of dental care "off the books" and other help for many people in his life!


His father, Victor Miller FAIRCHILD (also a dentist) served as an elder in the First Presbyterian church in Olean NY.  I don't know if he was ever also a deacon, but he probably was. [note to self: self put that on research plan to do list!].  I don't remember much about him, as he died when I was five, only that he was kind, gentle, spoke quietly,  and always had lemon or peppermint candies for us. From the stories told by others, he must have been an honest, faithful man, and I think also did a lot of unpaid dental work for people.  He certainly was loved!  When he died unexpectedly of a cerebral hemorrhage at age 63, hundreds of people attended his funeral. I have marveled at all the signatures in the guest book, and the comments of sympathy and loss sent to his wife.

Here is my favorite picture of the two of them: 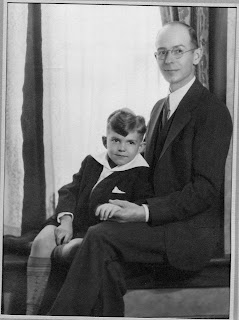 Then there was Grandpa's great grandfather [my great,great, great grandfather Zenas T Petty], who was a Methodist minister, but I'll be writing about him tomorrow as one of the Petty clan on Surname Saturday, so will skip for now. And two of his great aunts, Zenas' daughters, served as missionaries in the Presbyterian church at the turn of the 20th century. These two will be profiled next Friday.  And there are more!!!


and of course it's after midnight, so Friday is late!!!
Posted by Sue Barry at 1:26 AM

expect their writings excited every weekend, his writings are spectacular, thanks for this, desde Chile muchos cariños.