Well, today I am posting a postcard photo I found in a box. I don't know if the picture was one my Uncle Dan sent me, or Mom had, or where it came from, but it's more important to my Chilean cousins, and since the mail now is iffy, I'll post here so they can see it.   And since it has explanation, I chose to show it on "Sentimental Sunday", rather than "Wordless Wednesday"!
This photo was taken September 24 1933 in Tome', Chile. It says  "To Giovanni"  who is Pietro's younger brother, but the address written in blue pencil on the side is F. Leandro 1314 South St., Utica NY which is Felicita (Fessia) Leandro , Pietro's younger married sister.  The Italian at the bottom is about the picture being of Pietro and his eldest (or first) daughter Margherita [Italian spelling of her name]. I'm not sure whether the first part is "I send", or" return to me", but it will be winging its way to his youngest daughter Marta in Talcahuano as soon as the mail is reliable! It is really special, as Pietro died in 1934 of pneumonia.

Enjoy!  And I hope it  helps take their minds off the aftershocks! 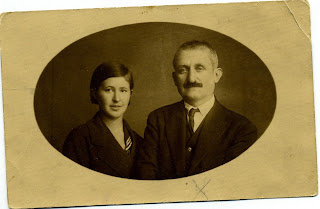 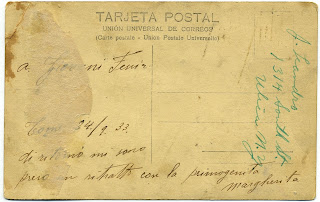 What a treasure! I hope your cousins receive it quickly, and that it will be one of many good things to come their way.