Well, the earthquake in Chile overtook last week's post before I could finish it. So here it is a couple of weeks late!


The next surname to tackle in my pedigree is Miller. This name, although not one I carry, is special to me. Although not arriving in this country from Scotland until the mid 1800s, through service and marriage, this family has helped connect me to my very American DAR, DUVCW, and  Mayflower ancestors.
My lineage is 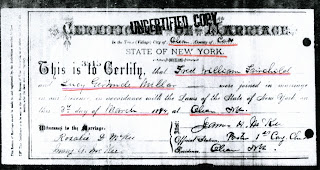 the mother's name on the reverse of the license is incorrect; she was Mary Elizabeth, not Isabella....

Gertrude (as she was known), must have been a sweet wonderful person, as her best friend named one of her daughters after her, and at least one other in the Miller family did also. She died suddenly of an infection about a week following the birth of her second child, grandpa's sister Marion, at the young age of 23 years, 1 month, and 1 day, on 11 April 1897.

18. John Miller (Jr.) The tale of the Miller family arrives in the U.S. in this generation. John Miller was born in Scotland, and arrived in the U.S. as an infant with his parents and older sister. He was the second of 6 children. There are at least 2 slightly different dates for his birth given. On his death certificate, it appears as Dec 8 1847. The ship arrival records (the "Cuthbert" arriving NY from Greenock, Scotland on 3 May 1849) have him as 3 months old. At present I haven't located the birth record in Scotland, so haven't nailed down which date is the correct one. [note to self: find it!] They were enumerated on the 1850 census living in Franklinville, NY with Alexander Miller (who is assumed to be the brother to John Miller Sr). He married Mary Elizabeth Burton sometime before the birth of their first child Etta, on 7 June 1868.  Many of the marriages at that time were kept in the minister's log, and so far, this one hasn't surfaced.... So I'll guess that it was about 1867. John was a blacksmith in Hinsdale like his father before him.
He died on 19 March 1934 in Hinsdale, Cattaraugus, NY. They are buried in Maplehurst cemetery there.


36. John Miller (Sr.)    born in Crieff, Scotland 20 May 1820 (parish register), 25 May 1820 per Death certificate.  He married Mary Elizabeth Bayne b. 1826 in Dunblane, Perthshire, Scotland on 1 Nov 1845 according to Old Parish Register 348 Dunblane Vol 4., where he was listed as being of Stirling. He was a blacksmith by trade,and is enumerated with his brother Alexander ( also a blacksmith) in 1850 in Franklinville. Alexander moved on to Michigan later, leaving John and his family to remain in NY.  He served in the Civil War, where he enlisted at age 42 as a Pvt in Co. D, 154th NY Vol Infantry on July 8, 1862. He was discharged on Dec 29, 1862 due to "coarse veins in legs". He was discharged before the unit went to Gettysburg.He and Mary had seven children.   He died 29 May 1902 in Hinsdale, Cattaraugus, NY.

72 John Miller   born in Alloa, Clackmannan, Scotland between 1790 and 1793. He died circa 1850 in Scotland. He married Elizabeth Anderson.  They lived on High Street in Crieff, where he and his sons were blacksmiths. 3 of his children immigrated to the US. His son David remained in Scotland.

The rest here is conjecture, not fully proven:

144.  Henry Miller   born 19 July 1753 Scotland. Married Janet St. Clare ( Sinclair). Living in Alloa, at time of John's birth. There are no other records in Clackmannan of another Miller couple with a son John of right age, so supposition is that these are the parents of John and his brother Henry who was baptized 7 Mar 1790