Wow, already time for another surname Saturday post.  This time I'm tackling another on my father's American side, PETTY.  My lineage to this line is as follows: [see ahnentafel page above for complete lineage]


1. Moi
2. dad-Robert Edwards Fairchild
4. grandpa Victor Miller Fairchild
8. great Grandpa Fred William Fairchild
17. Roxey [or Roxy or Roxcy] Rosalia PETTY, known as Rose or Grandma Rose by everyone, not just the family. She was born on 11 Jun 1847 in New Hudson township, Allegany county, NY, the fifth of seven children of Rev. Zenas T(illotson) Petty and Mary Ann Wadsworth.  Of her siblings, the eldest, Albert (the only boy) died in 1851 at age 19, cause unknown; and the youngest, a girl Myra Ann, died as an infant or very young child. Two others married and after their husbands' deaths did missionary work.
Rose married her husband James H Fairchild in her father's home ( he performed ceremony) in New Hudson, on 26 Feb 1868. They had 8 children, 5 boys and 3 girls. After  the birth of the first 2 boys, they moved to Portville, NY where her husband opened a shingle and grist mill. From newspaper articles, she was a member of the Woman's Auxiliary to the GAR, the WCTU (Woman's Christian Temperance Union), her church ladies society, and helped raise three of her grandchildren when their mothers ( her daughters-in-law) died while they were infants. Her home on Temple St. in Portville, NY was the gathering place for the family, including picnics and early family reunions. She traveled to nearby Pennsylvania, and as far as New York City by train to visit a daughter on Long Island. I do not know if she travelled to visit her sisters in Iowa or Nebraska, but letters were written, although only one or two survived. She died on 14 Feb., 1928, only one week before her last remaining sibling.
This picture of her with her 3 daughters was taken between 1902 and 1906 [by youngest's estimated age and before husband's death].


The second photo is a "clowning" picture of her (center)  and her sisters Emily (l) [married to Lafayette Gleason and Mark Titsworth]and Mary Fidelia (Dele) (r) [married to Albert C. Schuknecht]. It was taken sometime before Emily's death in 1914, and after her other sister Sophia's death in 1891, or she would be pictured as well, I think. Dele died the week after Rose.
34.  Rev Zenas T(illotson) PETTY was born in Romulus (Fayette) ,  NY  on Oct 20, 1808. He was the second of 8 children of Jesse Petty and Mary Ann Moffatt (or Moffitt). He moved with his family to Belfast in 1821.  [More about his siblings in his father's writeup]. " He experienced religion at the age of 27" according to his obituary. "He had an iron constitution, and in his younger days, but few could equal him in manual labor."The date of his marriage is not known, but his wife was born in 1815, and their first child was born in April 1832, so 1830-31 is a good guess. He married Mary Ann Wadsworth, who was born in CT or MA on 6 Aug 1815.   Zenas was a preacher of the Wesleyan Methodist Church and served a "circuit" of several churches in the Allegany county region of NY. Included were Fillmore/Hume, and Phillip's Creek. His wife died in 1864 of typhus, and he remarried the same year Arvilla OLDS of Gainesville, Wyoming County NY. The daughters must have not completely gotten along with her because Dele went to Iowa to be with her oldest married sister Caroline sometime later. [ A note: Caroline also married a FAIRCHILD (Reuben). The family says the two were not related, but they may have been second cousins, if new sources prove valid] .
Zenas and Arvilla moved to Oramel, NY just north of Belfast in 1869, where they lived until Zenas' death on 19 May, 1884. "He was a kind father, an earnest christian and minister, and death to him after so long suffering was the friend he had so patiently awaited to come. [he suffered from "catarrh of the bladder" for seven years, then caught a severe cold which killed him]. He is buried in Riverside Cemetery, Belfast NY alongside his first wife. I have found no trace of Arvilla after 1884, so do not know if she remarried, or where she lived or was buried.... another mystery to solve someday ( not high on the priority list!).
Although I have seen a copy of one photograph of Zenas, I do not have it to print here. But in 1882, he wrote part of the 23rd Psalm in my great grandfather's autograph book which was given to him on his 10th birthday that year.  Here is that page--- 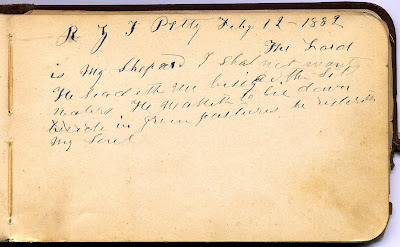 A letter from a relative written to great aunt Matie remembered him as kind.  Whether stern was also mentioned I cannot now remember, so will post the letter at a later date.

68. Jesse Petty  Jesse Petty was born in New Jersey in 1779.  He married Mary Ann Moffatt. There is a marriage between a Jesse Petty and a "Polly" Moffet in Somerset NJ on 19 Feb 1803. This matches with 2 males under 10 in the 1810 census in Romulus NY, and Jesse's brother was supposed to have married the twin to Mary Ann, whose name was Betsy. There is a John Petty married to a Betsy in the area as well.   Jesse and Mary Ann or "Polly" had 8 children that I have data on. [There is a possibility of a 9th child, but it is not yet proven].  The children were: Rufus born about 1807, who was a schoolteacher in Belfast, but who went and joined Col. Fannin's troops in the Texas war of Independence, and was killed at the massacre at Goliad; Calista married a Benjamin Shepherd,then John and David,of which David never married and according to family stories "died in 1846. He cooked for a mess of men. He had loaned money, and it was supposed that he was killed by the man who owed him."  Sally Ann who married Theophilus Mitchell [ would you believe I found 2 men of that name?]  William who married Sarah Ann Johnson& move to Il; and Elias B who married Hannah Merritt.
Jesse was called up in the War of 1812. His service started in Mar of 1814, and ended 28 days later, so saw no battles. 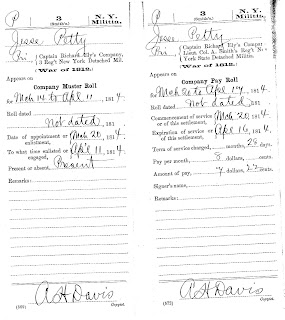 136. Jesse's father, Name unknown.  According to the family stories, this man had several sons, including Jesse and John. They lived in New Jersey, across the river from New York. The father is supposed to have served in the Revolutionary War, being a prisoner 7 times. Also some of his older sons were also supposed to have served as well.  Not sure he was much of a soldier if the prisoner story is true. He is the next supplemental DAR paper I will work on after I finish the 3 almost completed. Do not know if he followed sons to NY or stayed in NJ. The land in NY could have been bounty land, but won't know for sure until I do more on this line!

Thus ends the initial saga of my PETTY surname!
Posted by Sue Barry at 12:41 AM

We had Petty neighbors in western Iowa. Thanks for sharing.

Rosalia Petty was my great-grandmother. She is your great-great grandmother. Contact me at 4pbence@gmail.com. Perhaps we can share info.